Per Capita GDP by EU and US Region, Second Quarter 2020 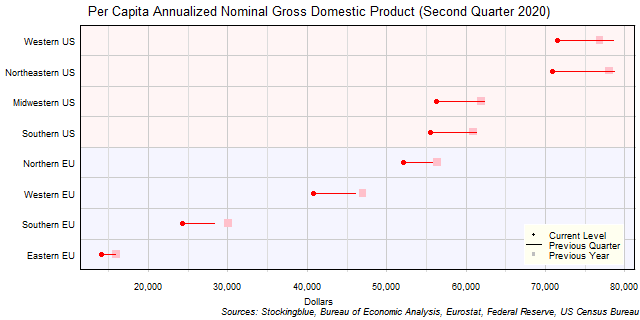 The chart above shows the per capita annualized nominal gross domestic product (GDP) in each EU and US region as of the second quarter of 2020 in US dollars, the change from the previous quarter, and the per capita GDP one year prior.  Every single region's economy contracted over the past quarter and over the past year.

The Western US surpassed the Northeastern US both over the previous quarter and over the same quarter last year.  The Western US has a per capita GDP that is higher than all Southern US and Eastern, Northern, and Southern EU states and is bested by ten states in total.  The Eastern EU has a per capita GDP that is lower than all states in all other regions and only bests five states from the Eastern EU.