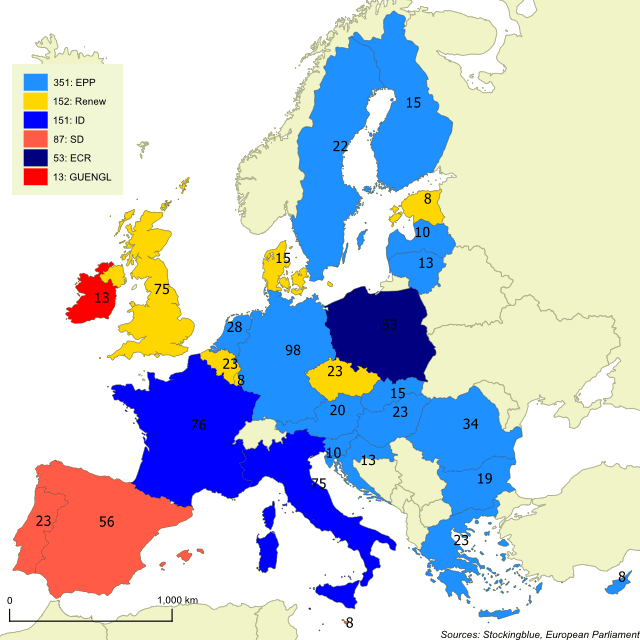 Recently, the European Union (EU) held an election to decide the representatives in the EU Parliament, the EU's equivalent to the House of Representatives in the US.  After the election, a Commission President is selected based on the results and on input from another EU body (European Council) which consists of the heads of state of the 28 EU states.  In this last election held on May 26, no party held a majority but the party with a plurality can attempt to form a coalition with other parties large enough to gain a majority.  The results were so scattered however, that the three largest parties needed to form a coalition to gain a majority.  Ultimately, they could not agree on a candidate to head the Commission and through backroom dealings, the European Council selected a candidate outside of the parties' leadership, and the Parliament voted her in this week.  How would the election look if the EU had an electoral college?  We take a look at the process below.  The map above shows how many electors each party would get based on this election's results.  Each state is given the number of representatives it has in the Parliament and one additional elector for each representative in the European Council and one for the Council of the European Union (so the number of parliamentarians plus two).  These two bodies are not exact equivalents of our Senate, but in order to simplify the highly bureaucratic institutions of the EU, it will do for now.  Another post looks at how the previous US presidential race would look with a parliamentary system.

Clearly, an electoral college would guarantee that a spitzenkadidat would become Commission President and would avoid the negative optics of a random individual being selected in backroom dealings by the Council.  However, neither Weber nor Timmermans gets the post as neither political group can reach a majority as can be seen in the map above.  This kicks off the contingency election process which sends the election of the President to the House or Parliament in the case of the EU, and the election of the Vice President to the Senate or the Councils (closest equivalent) in the case of the EU.

According to the US Constitution, the Parliament chooses from one of the top two candidates, in this case, the spitzenkadidats for EPP and Renew, Weber and Vestager respectively.  There, each state's delegation gets one vote for president in the Parliament and, if need be, one vote for Vice President in the Councils.  The incoming parliamentarians caucus on a state by state basis and give their state's vote to one of the top two candidates.  Based on the makeup of the parliament as can be seen in the table below, Vestager carries anywhere between 17 and 22 states whereas Weber only carries anywhere between 6 and 11 resulting in Vestager becoming the European Commission President.

In the case that the Councils cannot elect a Vice President, then the EU equivalent of the Speaker of the House fills the spot until someone is elected.  In our example, this would be the President of the EU Parliament who is currently SD's David Sassoli.

It should also be noted that the US and EU governing and political cultures are vastly different.  Americans vote for their local representative who will fight for the issues of the locality to which the representative is elected.  Europeans vote for a political party to enact a specific set of laws throughout the land.  In America, politics is very local as the representative looks out for the needs and wants of his constituents who reside within a specific geographic area.  In Europe, parties expect their representatives to vote the party line and representatives do not necessarily represent a specific locality.  Each system is different and each has its pros and its cons.  This post does not suggest that one is better than the other, it is merely a succinct review of a political process.