Carrot Production in the United States 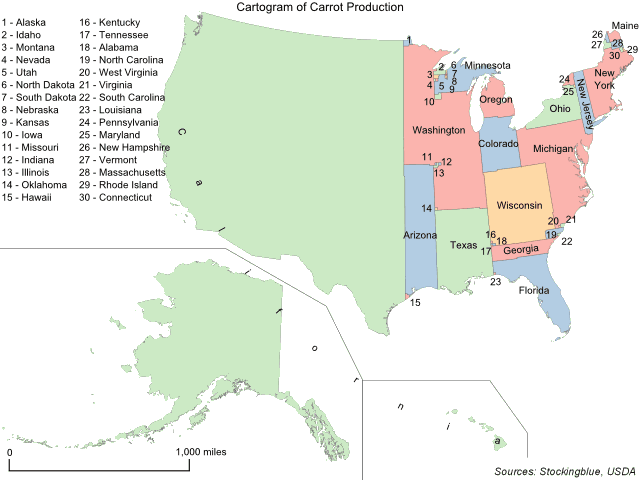 This week, like last year, the focus is on common Thanksgiving foods and which states produce them.  The geographically accurate cartogram above redraws the states' sizes based on carrot production.  Specifically the number of acres harvested.  All 50 states produce the vegetable and of the 50, the USDA publishes complete data on only 45 of them due to the other five states either having few producers which would make it easy for their competitors to know how large their operations are or a very small number of acres harvested.

The Western states dedicate 79.92% of the total land dedicated to the crop.  The Midwest comes in a distant second with 10.49% of all the land in the US dedicated to carrot production and is followed by the South at 7.11%.  The Northeast only dedicates 2.48% of the total.

The total reported area dedicated to the crop in the United States is 99,186 acres or 154.98 square miles (about one-tenth the size of Rhode Island).